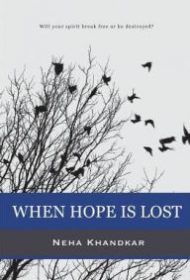 In Neha Khandkar’s debut young adult novel, a friendship is created when two lonely and emotionally scarred children find each other.

Eleven-year-old Ari is abused by a sadistic father who keeps him a virtual prisoner in his own house and beats him daily, insisting that this will keep him from becoming a “softie.”

Meanwhile, 12-year-old Rider is haunted by the death of her beloved older brother, Jen. Because she believes she could have prevented it, she bears the burden of her family’s suffering.

Each day, Ari secretly watches Rider ride her bike past his house. One day, while Ari is suffering another beating by his father, Ari realizes in horror that she has been a witness. Terrified, Rider speeds away. But she returns and meets him the next day. She is drawn to Ari out of compassion and curiosity and—because he reminds her of Jen. Cautiously, over time, the two reveal details of their painful lives, and one day, Ari tells Rider he has discovered that someone intends to kill him. The drama exponentially builds from here, and the plot thickens.

Perhaps the most astonishing thing about the book is its author. A mere 11-years old, Khandkar demonstrates a mature insight into complex emotions. In addition, she writes remarkably beautiful and sophisticated descriptions: “…I hear a squeal and then a distant screech, screech, scroo as Rider takes off. Father pushes his cheek out from the inside with his tongue, glaring at me. His beetle eyes narrow.”

The story’s problem, however, is that the plot increasingly becomes implausible, with a number of puzzling oddities. For example, although Ari has been severely isolated (and doesn’t know the word “car”), he’s inexplicably familiar with the words “sharpie,” “robotic,” and “firecracker.” The conclusion, in particular, strains belief.

Readers may be unsettled by the story’s implausible plot twists and turns. Still, they will have no doubt they have discovered an unusually talented and promising young author.