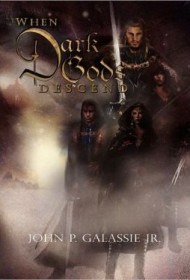 There appears to be a colorful swords-and-sorcery story–well, in this case it’s actually a swords-and-vampirism story–encased inside When Dark Gods Descend, just as one can vaguely glean a shape within a half-chiseled block of marble. A perfectly nice sculpture could eventually emerge, but there’s still far too much stone in the way. This first novel by John P. Galassie Jr. has its moments, but it’s in need of a lot more chiseling.

Galassie’s tale follows the adventures of brave knight Vikoss Fayn, who finds himself at odds with a race of seemingly vampiric creatures called the Thammaht-Khur. Along the way, he deals with forbidden romance, political intrigue and uncommon allegiances.

There are elements to admire in Dark Gods, which ambitiously touches on everything from racial and religious intolerance to political philosophies such as isolationism. Galassie knows his invented world comprehensively: he imagines settings in grand detail and richly conveys them.

Unfortunately, the author fails to get out of the way of his own story, as the book is in desperate need of an editor. It’s massively overwritten, congested with passages that detail Fayn’s exhausting analysis of every circumstance, along with consistently over-explanatory dialogue. Even when the tempo ticks up, the narrative remains packed with purple prose. At more than 300 pages of actual story, Dark Gods would be far stronger–and wouldn’t have to lose a single scene–if it were about 50 pages shorter.

That said, the book is copy edited fairly well. There are only a few misspellings (although one–a horse’s “reigns”–sticks out because it recurs often late in the book). Parts of Dark Gods show potential, but one hopes the author will work with an experienced editor before going to print with another adventure.