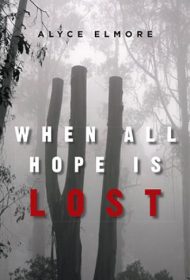 Alyce Elmore’s dystopian suspense novel, When All Hope is Lost, follows the political and social shifts that emerge in a female-dominated society after a widespread catastrophe.

The year 2029 marks the onset of a devastating global pandemic that annihilates the world’s male population within three years. Following the desolation, subsequent male generations don’t survive either; just before reaching their 20th birthdays, they exhibit erratic, dangerous behavior and soon collapse and die. By 2050, women have adjusted to a world devoid of adult males. Many in Australian society now view males as burdens; hence, their rights are restricted.

The story is structured as a 2069 interview conducted by a young, University of Melbourne student as an admissions requirement to its master’s program. The interviewee is an elderly person dubbed the “Old One,” who recounts the events surrounding the pandemic and successive political changes. Frustratingly, the interviewee constantly shifts her focus from one character to another, interrupting the story’s flow.

The novel also features various intriguing characters who try to navigate the post-pandemic era, including friends Karen, Josh, Benny and Zane who are forced onto different paths after the devastation; a political reporter trying to solve several interrelated mysteries; a researcher looking for a cure for the male malady, and key fictional political figures.

Meanwhile, there’s the suspicious death of the Greater Melbourne Republic’s premier; characters determined to fight Australia’s rising fascism and to champion the rights of males; and other intrigue.

Exploring themes regarding political autocracy, equality and human rights, this novel is a thought-provoking read. Its rich descriptions of its social and political settings and its fresh, relatable characters determined to stand up for freedom make it absorbing, as does the tension that builds throughout.