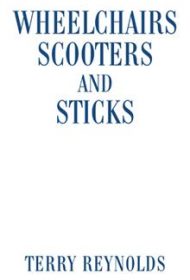 Call it serendipity: Terry Reynolds happened to be in the right place at the right time when he overheard a phone conversation between the harried woman in charge of transportation at a special school in London and a social services worker who failed to deliver a promised fleet of adaptive buses. This incident, and the “ramp ambulance” he spotted a few hours later, prompted his life’s work and the basis of Wheelchairs Scooters and Sticks.

A pioneer in the accessible travel industry, Reynolds started driving children with special needs in 1971 and later began offering “holidays” (or “vacation packages”) for people with disabilities via coach, mini-bus, plane and ship. What began as a business decision quickly turned into a mission, with Reynolds observing firsthand the extreme difficulty of navigating a tiny airplane bathroom with legs that won’t move or getting a wheelchair stuck in a pothole while crossing an Old World street.

Reynolds offers plentiful anecdotes throughout the book, in which he reveals an era when accommodations for the disabled were nearly unheard-of. He recalls suggesting to another tour operator that fully inclusive tours might be a future possibility. “You must be joking,” the operator replied.

The text suffers from punctuation and grammar errors, and Reynolds often fails to define acronyms unfamiliar to non-U.K. readers. Regardless, he does an admirable job of sharing his adventures in a straightforward style tinged with edgy humor and bittersweet moments. In one scene, a hotel manager tries to bribe a client with cerebral palsy to stay in his room so as not to disturb restaurant patrons with his presence. “That incident,” the author writes, “showed me how it would take a few years until attitudes changed.”

Young people with special challenges may marvel at the prejudices portrayed here, while older readers will recall their own brushes with bias. For the “able-bodied,” this book is a reminder that mobility is a gift that should never be taken for granted.