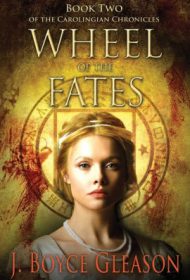 J. Boyce Gleason approaches the historical intrigue of eighth-century Europe with a frank and violent narrative eye—a tone completely appropriate to the political intrigue, constant warfare and machinations of those seeking power after the death of Frankish leader Charles Martel in 742 C.E.

In this second installment in Gleason’s Carolingian Chronicles, the author focuses on Martel’s sons, Carloman and Pippin, as they seek to establish power in the vacuum left by their father’s death. He also follows the lives of those on the political periphery of the struggle.

Gleason never shies away from battlefield brutality or the graphic violence of would-be kings, mercenaries and zealous soldiers. The book opens in the immediate wake of a slaughter in the northern Francia town of Laon, where Carloman has laid waste to an enemy army. Pippin also played a role in the slaughter, an act that spurs his love, Bertrada, to end their relationship. “They say you’re violence incarnate,” she tells him, setting a tone for the book.

Sex and intrigue also play prominent roles. Pippin’s sister Trudi has married Odilo, although promised to a Lombard prince and carrying the child of another father. Meanwhile, the young Miette, who has recently married a lord “twice her age” without “an ounce of sexual desire left in his body,” has an affair with the future king Childeric, which carries its own disturbing pitfalls.

The connections between the characters are complex, and Gleason lightens the historical density with battlefield exploits and soap-opera intrigue. Those who appreciated gritty historical fiction a la Ken Follett’s Kingsbridge series will revel in this. However, the battlefield gore and frequency of female characters uttering lines like, “I am yours to command,” can make the story feel shallow and formulaic.

Even so, Gleason has a skill for writing compelling action amidst political intrigue, and readers who seek this blend of sex, violence and drama will find the author’s odyssey into the eighth-century world of Francia immersive.