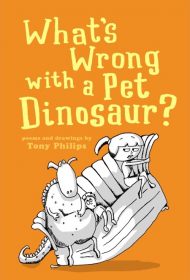 What’s Wrong with a Pet Dinosaur? is a collection of humorous poems appropriate for children ages four through ten, written in a style and tone reminiscent of the famous poet Shel Silverstein. Simple line drawings created by the author complement the text.

The poems address everyday childhood experiences and queries with a zaniness that will appeal to children. For example, what child has not tried to get out of practicing a musical instrument? “Piano Practice” features a girl who comes up with a litany of excuses. It begins: “I’ve been playing the piano/ For all of six minutes/ I know that’s not long/ But the song’s nearly finished./ Do you think I could stop now?/ My hands really hurt./ I just want a snack,/ Of some apple and yogurt./ And maybe I’ll step out/ To check out the sun./ To see where it’s gone./ I’m sure that’d be fun![…]”

Another poem suggests having a second Christmas. (“I’m starting a new holiday, it’s crazy, I know/ It’s called Summer Christmas, and it won’t involve snow”). In yet another, a child sees his mother swallow a watermelon seed and ponders months later whether the bulge of his mother’s tummy is a brother or a melon. Finally, toots, burps, and barfing, always a source of hilarity for kids, are the subject of several poems.

The author has the gift of seeing the world through children’s eyes. As a result, most of the themes are on target. The rhyming text, although occasionally somewhat forced, adds to the light tone. In addition, often amusingly unexpected endings keep readers off-kilter and highly entertained.

As the author depicts experiences of children’s day-to-day life and creatively casts them in a silly light, he’s sure to tickle a child’s fancy. For an added bonus, the book includes an index of all the poems by title so children can easily find their favorites.