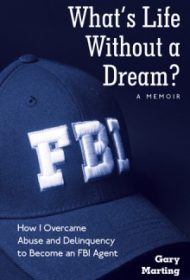 Gary Marting’s dream of becoming an FBI agent drives this narrative of his determination to prove his worth to his abusive father, Harold, and himself.

The book’s title comes from Marting’s mother. Despite being married to a man whose temper would flare white-hot in an instant, she could still dance around the house like Ginger Rogers, teasing the oldest of her three sons, “What’s life without a dream?”

Harold didn’t share her upbeat attitude. For the smallest infraction, he would degrade and beat young Marting for hours. The abuse took a toll: Marting graduated high school near the bottom of his class. Desperate to get away, he took advantage of a serendipitous opportunity to enroll in Southern Illinois University and thrived there.

Sworn in as a second lieutenant in the U.S. Air Force, he served as an intelligence officer in Vietnam and, in 1971, became an FBI agent. Harold had died the year before without ever showing any pride in his son.

Marting skillfully describes his challenging and often-dangerous work for the bureau. He apprehended fugitives and investigated police brutality in Alabama, extortion, and other white-collar crimes. His last job before retirement in 1996 was conducting interviews of White House staff for the Whitewater investigation. The author is unusually introspective and emotionally open for a man of his age and experience, noting that he’s at peace with his father and grateful for the values Harold instilled in him.

The Marting family, like everyone’s, has its own lore, pet names, and incidents. They take up almost the first quarter of his story and will most interest his family circle. The book doesn’t really take flight until Marting enters the Air Force. As such, it isn’t likely to resonate on a mass-market scale.

Still, Marting has realized his goal of honestly sharing his life with the next generation of Martings. And what a gift if his book is discovered by a struggling kid with a dream.