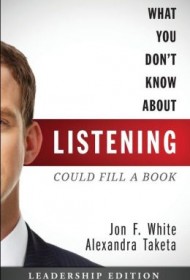 Are you a good listener? It’s the kind of question that evokes a visceral response, and some readers of this new book about refining listening skills may feel a bit put off by the authors’ pointed question. But the deft way Jon F. White and Alexandra Taketa expand on that topic will make most readers want to read further.

Should they do so, they will be treated to a superb discussion about how authentic listening goes far beyond signaling the most cursory of acknowledgements: the nodding heads and monosyllabic-filled utterances that too often pass for conversation.
The authors have filled What You Don’t Know About Listening with the kind of solid advice that goes far beyond the typical “Let’s feel good’” books about sharpening communication skills. They ground their rigorous approach in the belief that when conversers use the right kind of questions, specifically “open-ended” (what vs. why) queries, they trigger answers that not only provide fertile ground for further thoughtful questioning, but also help speakers feel that they have been heard.

While focusing on the benefits of asking great questions is not new, the authors surpass other books of this ilk by demonstrating in depth how closed-ended questions are so counter-productive. The authors convincingly argue that this type of questioning often makes people feel defensive and subsequently less inclined to talk. They also provide solid role-play scenarios where readers can understand the give and take of a conversation when they are on the path to becoming great listeners. Later chapters focus on how business leaders can apply these same listening habits to their hiring, delegating, and coaching responsibilities.

In a world where the signal-to-noise ratio threatens meaningful conversation, What You Don’t Know About Listening should be required reading for everyone who not only feels they have something to say, but who also have a stake in what they are able to elicit from others.