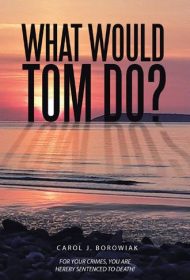 In What Would Tom Do? Carol J. Borowiak presents a feisty female criminal psychologist embroiled in the search for a serial killer while being stalked herself by a dangerous psychopath.

In her late 50s, Laura Timmings is a psychologist working with dangerous criminals in Manchester, England, but commuting to her rural home in North Wales. A single mother of adult sons, she’s also seeking romance.

When a neighbor is murdered, Laura is drawn into the investigation. The suspected culprit is known as the Vigilante Killer – a person, or persons, who kill convicted murderers and pedophiles – but Laura faces more immediate dangers, too. After rejecting a man’s advances during a chance encounter at a supermarket, Laura finds her life threatened as the man makes repeated attempts to hurt Laura and her friends.

Laura is an interesting, complex character. She’s outspoken, sassy, loyal to her friends and out to have fun in her personal life. She has strong opinions and has faced family conflict in her past, notably with her mother and an older son. She’s close to her younger son and her three friends, Livvi, Rae and Daisy, with whom she’s involved in a dangerous, secret endeavor. Although Laura’s choices and opinions are unconventional, she’s an attractive, larger-than-life character, and, as the drama unfolds, readers will be anxious to see how her story resolves.

Other characters are not as well developed, however. It’s unclear why Laura’s friends would participate in their secret partnership, rendering this aspect of the plot unbelievable. Dialogue is weak throughout the novel. Additionally, it’s frequently hard to know who is speaking due to punctuation issues. There are also significant issues with tense changes, often within a sentence, and misused words. Readers should note that the story features strong language, sexual content and graphic violence throughout.

Such issues greatly impact the story’s readability. Still, those who persevere will find a fast-paced read with a bold main character.