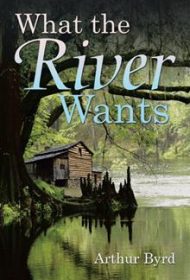 The story opens as Mississippi teenager Lee embarks on a visit to interview his grandfather for a genealogy project. Lee is apprehensive, as Tom, his grandfather, has grown increasingly ornery and reclusive since Lee’s grandmother, Oui, died.

Grandfather and grandson take to each other, however, and Lee comes to admire Tom’s self-reliance and his closeness to nature. He is also enthralled by Tom’s tales of Lee’s great-grandmother, Saralynn – tough, loving and wise but not without her own troubles.

Tom’s world, however, is far from idyllic. He mourns the loss of his wife, and finds his memories complicated when his best friend shares a long-buried secret about Oui. He also faces the prospect of eviction by a vindictive sheriff.

Lee’s family life is complicated, too. His father is frequently on the road, and his mother suffers from loneliness. His older sister struggles with poor self-esteem and a controlling boyfriend. What the River Wants follows these characters as they work to come to terms with the past and—sometimes successfully, sometimes not—build more hopeful futures.

The story occasionally veers into purple prose (“A thousand thoughts passed over Lee as worry became ecstasy…”) and contains a few homophone errors (“wrap” for “rap; “specs” for “specks,” etc.). But these are minor distractions. Byrd’s writing style is generally precise and lyrical. The author also displays an impressive level of empathy for his characters. Each one comes across as a fully realized person, devoid of cliché. The novel’s ending, though not happy for everyone, offers a satisfying, ultimately hopeful, resolution for the reader.

Overall, this is an accomplished novel—one that should hold great appeal for fans of coming-of-age stories and family sagas.