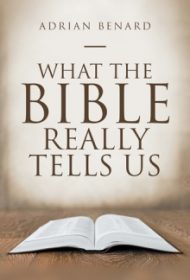 Christians from all walks of life often espouse the basic theological tenet that humans are created in the image of God. Author Adrian Benard isn’t so sure about that idea. Instead, in his provocative book, What the Bible Really Tells Us, he is more inclined to believe the opposite—that God was created in the image of humankind. Why? Because God—supposedly perfect—often acts so imperfectly, just like us.

From the time Benard was a teenager, he began writing down “discrepancies and contradictions” he found in the Bible. Here, he brings those problems to light, challenging many widely held Judeo-Christian beliefs.

Why, for instance, if the original version of Genesis says “Gods” created the universe, do our modern-day translations only say “God”? What are scholars and religious leaders trying to hide? And why propose the idea of monotheism when the Bible speaks of two Gods in the Bible—Elohim and Jahweh (God and the Lord God)? “The original Bible,” Benard writes, “has been molested in the new translations to the extent that the majority of all the words and verses throughout the Bible have been changed.” Benard also calls out the passage in John 1:18 that says no one has ever seen God. Not true, says the author, who gives evidence to the contrary from passages in Genesis, Exodus, and Deuteronomy.

Benard is a passionate writer with a keen eye for textual problems in the Bible. However, readers should know that, while interesting, Benard’s book is driven mostly by his opinion and seldom cites scholarly sources to back up his ideas. Also, his book requires editing to correct numerous typos (“No, their work is and stays tn finished”), grammatical errors and misused words (“deduct” versus “deduce”). These mistakes and lack of sources often undermine the author’s authority.

Overall, while Benard’s premise is bold and his frustrations are important, the book needs more editorial work to refine his prose and bolster his arguments.