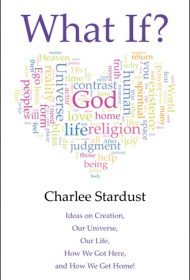 In What If?, Charlee Stardust shares metaphysical conclusions derived from the his own spiritual growth.

Noting that he’s “not a scientist” and that his viewpoints are “sprinkled with faith,” Stardust explores the nature of existence. God, he claims, is a neutral, perfect source energy. Originally we were a part of this source energy, but we split off to create a contrast through which we could “understand ourselves.”

The world we then created, Stardust asserts, is one of illusion: “just a movie that we created for ourselves.” To return to the source and “our true home in Heaven,” we must “totally disassociate with the physical world.” Until we do, we will be “forced to relive in this life of contrast, over and over and over until we finally realize we’ve had enough.”

Stardust subscribes to the Freudian scheme of id, ego and superego to describe how we relate to the “illusory world.” He also believes that the New Age “Law of Attraction” plays an important role in “the success of prosperous people.”

The author’s engaging, conversational tone helps offset the abstract nature of his ideas. He acknowledges influences from esoteric works such as Helen Schucman’s A Course in Miracles and Byron Katie’s Loving What Is. Like these authors, he seeks to give spiritual guidance.

Unfortunately, although he writes that “we would be better off if we could judge less and love more,” he devotes pages to off-topic criticisms on myriad subjects—from martyrs to the Amish to the NRA—that undermine his authority. He also fails to support some declarations (“Most scientists today theorize that the human body…could not have progressed naturally to the state in which we find ourselves”) and tends to exaggerate (“Our right to bear arms should not give us carte blanche in purchasing said weapons with a right to kill”).

Attention to such issues would improve this narrative. Still, What If? may interest some readers seeking a spiritual path.