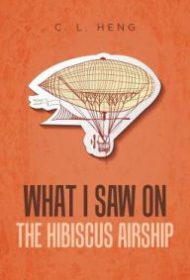 C.L. Heng combines faraway fantasy and emotional immediacy in What I Saw on the Hibiscus Airship, an approachable novel that incorporates elements of fantasy, romance and science fiction.

Paradise on Bumi is a utopian city set in a far-off world and an unspecified time, a place where a government run by a political entity known as the Forlorn promises equality and opportunity for all. But those ideals aren’t the reality for the characters in Heng’s novel, who find themselves locked in a life-or-death struggle with the Forlorn and the powers-that-be.

After the birth of his daughter Arla, Dara Hibby finds himself at odds with the Forlorn and in danger of disrupting his promising life as a loyal citizen of Bumi. Forgotten secrets buried in his past catch up with him and his family, eventually turning his daughter into an orphan. Arla finds herself pitted against the Forlorn as revolution grips the city around her, and her ultimate hope for salvation lies in the Hibiscus Airship, the subject of children’s stories and myths about a floating aircraft that kidnaps children. As it turns out, the airship is no myth, and Arla joins a colorful troupe of comrades to discover the truth behind the stories.

In telling the story of Arla’s quest, Heng creates a rich world, a setting that breathes with immediacy and detail. The larger story of Bumi’s struggles under the Forlorn’s rule serves as a vivid backdrop for the personal struggles of his well-drawn characters. Apart from a tendency toward stiff dialogue and some stretches of awkward descriptions, Heng manages to fuse fantasy with a realistic sense of political struggle and personal stakes.

Indeed, the detail in this book recalls the intricacies and intrigue of fantasy novelists like Phillip Pullman. Fans of fantasy tempered with human drama and a dose of immediacy will find plenty of enjoyable treasures in this charming debut.