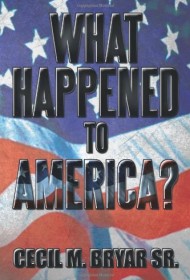 Cecil M. Bryar Sr. is upset at the direction of the nation. In his book What Happened to America?, he heaps the most blame on elected politicians and backstage functionaries who direct the Republican Party. Including the book’s Introduction, Bryar offers 19 opinion pieces that are rarely devoid of anger aimed at contemporary Republicans.

In recent years, Bryar has begun sharing his thinking by writing letters to the current occupant of the White House, Barack Obama, and Democratic Party leaders such as Nancy Pelosi. The author is an avid supporter of President Obama, urging readers to focus on the good accomplished since Democrats won the White House in 2008.

An auto technician for about 25 years who has also been employed as a state motor vehicle emissions inspector, Bryar would like the nation he cares about to run as smoothly as a well-tuned car. He would halt job outsourcing to other nations; cut dependence on foreign oil; and enact economic policies that end devastating recessions. He would end egregious tax breaks for wealthy individuals and expand health insurance to cover the poor, through state government-funded Medicaid or something akin to it.

There is a great deal of repetition from one essay to another, and the order in which they are presented seems haphazard. While his essays are written clearly and forcefully, it is unclear how much original research, if any, Bryar has conducted to undergird his strong opinions. Generally, readers must accept on faith that the author is well informed.

The book includes letters Bryar has received from various politicians, but many appear to be stock responses that could have been mailed to any political donor or volunteer.

As a result of these issues, it seems unlikely that Bryar’s book will sway devoted Republican voters. The volume’s most likely audience will be those who already agree with Bryar’s positions — and unfortunately, they are likely to learn little new in this slim compendium of the author’s opinions.