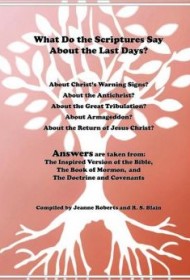 Although there have been many books written by evangelical Christians on the prophesied End of Days, more notably David Lindsay’s The Late Great Planet Earth and Tim Lahaye/Jerry B. Jenkins’ fictional Left Behind series, relatively few have included texts from the Church of Latter Day Saints.

In What Do the Scriptures Say About the Last Days?, Jeanne Roberts and R.S. Blain look to fill that gap. The authors perform an exhaustive examination of the Bible, The Book of Mormon and part of the open scriptural texts of the LDS known as Doctrines and Covenants in an effort to uncover the truth of Jesus’ Second Coming and to remind readers to watch for the eschatological signs that many have ignored. The book, the authors write, “identifies Christ’s warning signs…it demonstrates how many of these signs are rapidly being fulfilled today.”

The book looks closely at 26 signs that the end of the world may be nearer than you think. Roberts and Blain believe there are only two signs that haven’t come to fruition: the revelation of the Anti-Christ and the rebuilding of the Temple in Jerusalem. The authors provide practical information on what you can do to prepare for these cosmic events (including, for example, what to do if your power goes out for extended periods of time).

The authors’ hearts are in the right place, but reading their book is a laborious task. It is opaque, and readers will need to have at least a competent understanding of Christian and Mormon texts to feel somewhat rooted in the authors’ discussion. Although they are clearly knowledgeable about the topic and their scriptural summaries are generally succinct, there is much repetition and bad syntax here in need of editing. Moreover, the book’s interior design, with its indents and charts, can make dense information even more daunting.

In sum, while the authors’ ideas may be worth noting, the flaws in delivery make for a challenging read overall.