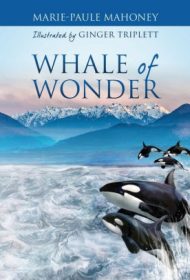 Marie-Paule Mahoney’s children’s picture book Whale of Wonder details the poignant, informative story of an orca mother who grieves the loss of her offspring.

This tale is based on the true story of a whale named Tahlequah, who gave birth to a calf that lived only 30 minutes. As the world watched, Tahlequah openly grieved, swimming with the baby on her head for 17 days before finally releasing her.

As the book begins, Tahlequah swims with her young son Notch, who peppers her with questions; for example, he wonders why he can’t understand orcas from other pods; she explains that each pod has its own language of clicks and whistles. She also describes echolocation, the relationship between orcas and humans, and the deep, lifetime bond orcas have with each other.

Notch soon asks about his baby sister, who died and was carried by their mother for weeks after. The rest of the story elaborates on Tahlequah’s grief and path to healing, in addition to the aforementioned topics.

Mahoney does an admirable job weaving orca facts into their conversation, including issues of captivity and pollution. Later, she captures the essence of the maternal bond with lines like, “My dreams about her life and mine were tightly connected.” When Tahlequah recounts swimming to the ocean’s bottom, laying her baby on the soft sand and finally saying goodbye, it’s a powerful moment unmatched by most children’s books.

The writing is simple yet lyrical and the book includes an afterword detailing the true story of Tahlequah. The art is vibrant, executed in a realistic, kid-friendly, full-color style.

The text has some minor punctuation errors, such as the extra comma in Notch’s response to his mother’s explanation of her grief: “I think, [sic] I understand.” And the afterword seems more suited to parents than their children. But these are easily overlooked amid the book’s many positive attributes.

In all, Whale of Wonder is a moving and memorable children’s book.