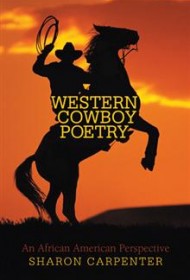 Sharon Carpenter’s Western Cowboy Poetry begins with a fascinating historical overview of “African Americans who headed west seeking opportunity and freedom” and from whose perspectives the ensuing poems are told. These pieces are reliably lively in tone, written to be performed aloud, and peppered with interesting historical facts and figures.

For example, “Stagecoach Mary” begins: “Don’t know if you are aware/ Of this one thing:/Way out West, gals/Were outnumbered—/Four men to each—/So they had choice pickins’;/Some chose to marry/Others did not./ if a gal married/And he was rot,/She could divorce at daybreak/And remarry at dark.

The book is divided into four sections. In the first, Carpenter focuses on experiences of West-bound former slaves. Although the sing-song rhymes grow wearisome, poignant details such as “Lost four whole fingers through that cold blast” and “I tilt my Stetson back/ Toward the bull inside” command attention.

In the second section, Carpenter explores post-Civil War work opportunities in the West. The range of these poems is still limited by forced rhyme schemes and melodramatic language, but the narratives engage nonetheless: “I was a master bronc rider, you see;/ I lassoed the devil in his cell.”

Section three depicts Western friendships and romances, and the fourth section takes a reflective turn that would be best supported by a shift toward free-verse meditation. For instance, “The need to roam—Is it really new?/ To yield to the urge/ Like a cowboy true” stunts the deeper emotional possibilities of this speaker’s perspective. And yet, there are moments of stirring insight, too: “…[E]ven as a hired hand,/ There is no acknowledgment/ That I am a man, a creature with a soul…”

Overall, this collection shows ideological and stylistic promise. If the author varied the style of her poems to include free-verse and prose poetry, she might better distinguish the voices of her speakers and highlight their unique complexities. Still, there is much to enjoy in this often well-crafted collection.