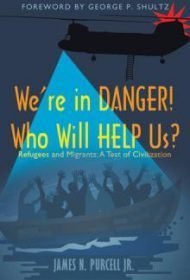 In his book—part memoir, part commentary on U.S. refugee policy and its development—James N. Purcell, Jr. offers unique insights into the State Department’s inner-workings as his team formed the Bureau for Refugee Programs.

While the narrative starts from 1969 and moves chronologically to the early 1990’s, the primary focus is from 1979 to 1989 when Purcell was most involved with conceiving, formulating, negotiating, and implementing refugee policies and programs. The narrative chronicles in detail how these initiatives spawned additional organizations that worked with other nations and NGOs (notably the United Nations) to build international coalitions. Eventually, these organizations were used as leverage during U.S. foreign negotiations.

The narrative is detailed, chronological, and well-referenced, showing how even “simple” decisions take time to work through a process. The level of detail would interest those already immersed in the workings of statecraft, rather than general readers.

The last 50 pages theorize possible implications of implementing the same framework for Syrian refugees. The author concludes that we have cheapened certain human lives based on criteria such as race, ethnicity, and religion. We have also weakened a functioning framework to aid refugees as our foreign policy has shifted away from upholding human rights. As a result, we have become more xenophobic, less globally minded, and ultimately less respected.

Situations described here stem primarily from political instability that led to mass migration. Given that our current focus is on comprehensive immigration reform, and that refugee issues have become more complex since the 1980s, the mechanisms that once successfully worked may not be adequate in today’s changed social and political landscape. Thus, some of the author’s conclusions when analyzing the Syrian refugees may need additional justification.

Ultimately, this book’s value lies in the detailed chronology of how the refugee program was conceived and implemented during the Carter and Reagan presidencies.