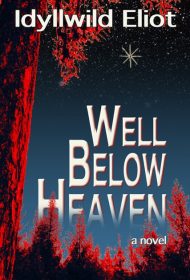 Idyllwild Eliot’s edgy, epistolary YA novel takes readers on an absorbing emotional roller coaster as it follows a teenage brother and sister through a turbulent year.

When Kelly Cantz’s parents catch her with marijuana, they send her to a reform school in the Idaho mountains. Her younger brother, Sammy, left behind in Missouri, soon encounters his own troubles.

Sammy is a quirky middle schooler with a penchant for surreal and slightly macabre storytelling and a burning desire to play football. He also has an incipient crush on a high schooler named Briana who runs with a bad crowd that includes Kelly’s sleazy ex-boyfriend. Kelly warns him to stay away, to no avail. By the time Sammy learns just how much trouble his sister was in before leaving home, it may be too late for him to avoid a situation with scandalous and potentially life-threatening consequences.

The story is told in letters and emails exchanged by Sammy and Kelly. Eliot interweaves the suspenseful main storyline with poignant subplots. Kelly initially treats an obsequious fellow student with disdain, but later finds compassion for her. Sammy fights to express himself when his teacher disapproves of his bizarre story about a “chocolate sniffing dog.” And both teens see their relationships with their parents ebb, flow and ultimately deepen.

The author’s command of the protagonists’ voices is impressive. Kelly and Sammy are witty and wry, free with the unfiltered language typical of teenagers. (Of her school’s strict rules, Kelly writes, “Mountain lions on campus, but no cameras. It’s a fucked up school.”) This language and content that includes references to sex, child/teen pornography (which figures large in the plot), abortion and drugs make the novel best suited for older teens.

This content, however, never feels prurient or gratuitous, and Eliot’s skillful writing and deft characterization create a story adults may savor as well. Readers will surely find themselves thinking about Well Below Heaven long after turning the last page.