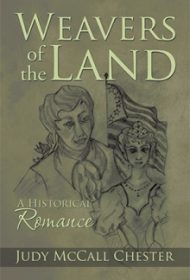 At times harrowing, but ultimately heartwarming, Weavers of the Land is a superb historical romance novel centered on protagonists Robert and Kate as they leave their home in Ireland for a new life in America.

Mary Katherine (later called Kate) grows up as a princess, the daughter of King George III. Although her parents discourage it, she falls in love with weaver Robert McCall, who is commissioned to make a tablecloth for the king. The completed tablecloth bears the image of a bald eagle, a symbol of the American colonies seeking independence. Because of the impending revolution, George III sentences Robert to death for treason.

Kate’s servant aids Robert in an exciting escape, and the three—Kate, Robert and the servant—embark on a trip across the Atlantic for a new, uncertain life in the fledgling colonies. Chester chronicles love, family, and friendships against the backdrop of the Revolutionary War.

Kate and Robert’s romance holds the story together, but a brilliant cast of secondary characters such as the Thatcher family, Kate and Robert’s first friends in the colonies, each add depth and warmth. As the couple makes their way in this new land, unforgettable, dramatic, and poignant moments are found on each page.

The author has a clear appreciation for history, and fictional characters blend easily with historically accurate depictions of the war. Although history buffs will be pleased, this aspect is never overbearing, but skillfully balanced with the primary characters and their personal journey.

Reminiscent of Laura Ingalls Wilder’s Little House books in how it captures the magic of building a life and family in an often-unforgiving land and time, this is a timeless story. Particularly engaging is the evolution of Kate, who leaves the royal court and finds her strength and true place in the world.

A perfectly paced tale, this is a wonderful addition to the genre. Fans of historical romance will find Weavers of the Land difficult to put down.