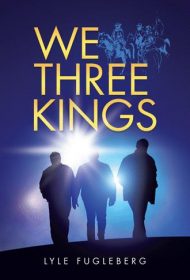 Lyle Fugleberg’s novel We Three Kings, tells the tale of time-traveling Confederates and three men touched by their appearance.

In November 2020, three men see a “flash” near Franklin, Tennessee, that precedes the appearance of a handful of Confederate soldiers yanked from the Battle of Franklin in 1864. The men set out to explore the significance of the event and hide the soldiers from view by finding them jobs and teaching them to drive.

As the story unfolds, readers will find solid prose, line by line. However, the narrative is weighed down by stiff and expository dialogue, jumps in point of view, and rehashing of established information. The action plods through much eating, traveling, and men talking while women eavesdrop and fix meals.

When the story finally arrives at its central question—why God has “called” these three men to witness this miraculous occurrence—it becomes a list of “problems” facing the U.S., for which the author proposes solutions. The conclusion is that God has called on these men to fulfill the Founding Father’s vision. Thus, the story becomes mostly a platform for the author’s political views, which include opposition to political correctness and other progressive conceits, while promoting Christian religious observance.

Fugleberg chooses surprising characters as instruments of his opinions: Gordon Sweeney, a gay college professor who entered a heterosexual marriage; Joshua Rosenthal, son of a Muslim and Jew and who became an evangelical Christian pastor; Carver Harris, half black, who admires Confederate General Nathan Bedford Forrest, even excusing him for his role in the Ku Klux Klan. These choices may strike some as either tone-deaf or wildly offensive.

Readers who share Fugleberg’s affection for Confederate battles and valor and wish the present-day U.S. conformed to the vision of its white, Christian founders may enjoy the story. Those who don’t relish fictive proselytizing or would rather hear people of color speak for themselves on racism, immigration, and inclusion would do best to look elsewhere.