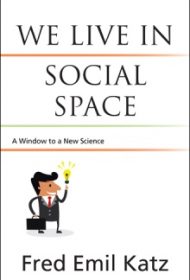 We Live in Social Space is part of Fred Emil Katz’s Holocaust Survivor’s Odyssey series. Although the author was rescued by the Kindertransport of imperiled Jewish children before WWII’s outbreak, the rest of his family was killed in the Holocaust, and this personal history drives his work. Here, Katz argues that the Holocaust is not an isolated phenomenon, but one which has happened again (i.e. the “ethnic cleansing” in Bosnia and the Rwanda genocide) and may recur in the future.

To prevent future genocides, Katz posits that we need to develop new “ways of looking so that we may see more clearly.” Only then may we “eventually create effective weapons against such horrors.”

Katz provides four primary “constructs” to facilitate a clearer view of the social mechanisms leading to genocide. The first, which he calls “Hidden Space,” is characterized by an individual’s proclivity to bury unacceptable emotions and prejudices in his subconscious, where they may later be triggered by a charismatic leader; for example, this occurred in Hitler’s Germany, where previously “unmentionable anti-Semitism was suddenly and fulsomely activated.” Other constructs include when a group, separated from the mores of the greater world, forms its own ethical priorities (My Lai Massacre) and when group perceptions coalesce around a transcendent concept (The Heaven’s Gate cultists).

Katz’s constructs are insightful, but his book sometimes lacks follow-through. For instance, he records no interviews with the American soldiers at My Lai to show what they really felt, and he uses “imaginary” rather than real “occupants of a nursing home” to demonstrate how childhood conflicts could bleed into the present. Most of his proofs are anecdotal and “unscientifically gathered,” and while he helps us to see “more clearly,” he doesn’t offer steps or guidance to avert future horrors.

Nonetheless, Katz’s book powerfully depicts the immediacy of genocide—how it can happen here and now. As such, it deserves a place in the library of anyone interested in the social aspects of atrocities.