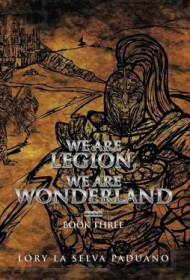 Lory La Selva Paduano knows the value of a good plot twist. The author’s fantasy novel We Are Legion, We Are Wonderland, the third in her Wonderland series, stands out in part because of her skill at veering from the formulas of the genre.

What ends as an epic battle in a fantastical, medieval setting begins as a much more contemporary tale. We meet the book’s protagonists – twins Cam and Stephanie Burrins – in modern-day Boston. They are typical, privileged 18-year-olds, just out of high school and bound for Harvard. In a casual, conversational style, the author introduces us to their family and friends and offers anecdotes about wild parties and other typical pastimes of teenagers, sexual and otherwise.

From there, the script shifts dramatically. Cam learns of his family’s ancestral ties to mystical figures from another time and place through interactions with his girlfriend, Leila. As it turns out, Cam and his sister are destined to be protagonists in an epic battle that will take the siblings, their new companions and old friends back in time to a distant world called Wonderland.

Paduano’s blend of modern references and the standard lore of the fantasy genre is clever and refreshing. The author mixes allusions to iPhones and online chats with a detailed mythology that includes cues from medieval history and a fictional universe.

The author pushes the limits of her conversational style throughout the book, however, an approach that doesn’t always work. A tone that can be charming and informal at its best moments turns offputting at other times, such as when she callously refers to bullies who “spread the word faster than AIDS had spread in the early eighties.”

Those moments aside, Paduano offers a fresh take on a genre that too often falls into predictable structures and familiar tropes. While she isn’t always successful, she maintains vivid characters, nearly constant action, and a keen sense of a good narrative twist.