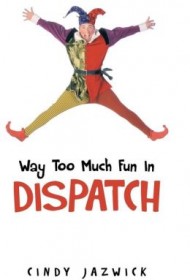 In Way Too Much Fun in Dispatch, author Cindy Jazwick has collected a series of first-person vignettes from a job as a security dispatcher at a hotel and casino.

As you might imagine, there’s no shortage of people who overindulge at the bar and complain when they’ve lost all their money or overindulge and then throw up without first making it to a bathroom. There are also those who bring in giant snakes, or take out a breast augmentation for show and tell. It’s clearly a colorful gig.

The trouble with Dispatch is the writing. Misspellings and poor grammar abound. The author confuses “know” and “no,” and quotation marks, commas and periods appear and disappear randomly and unpredictably. An example: “Jim said, why did you walk away? The customer said, will [sic] isn’t it a cash and win machine! Jim said, NO, the customer then said, I want to talk to the police and report my lost. [sic] Jim said, Cindy call PD for this customer.” The narrative is muddled at best.

In a few stories, the author implies that she has had a relationship with another employee, then depicts him leaving with a colleague instead of her. As these aren’t funny in the least, they seem like personal ax-grinding and drag the book further off course.

Dispatch isn’t a lost cause. A collection of tightly organized and well-edited stories about a job like this would likely be a hit. But this compendium requires better organization and editing in order to make it an enjoyable read.