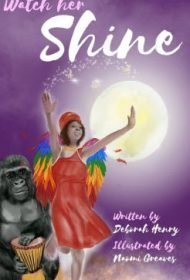 A suspenseful middle-grade story, Watch Her Shine follows the adventures of a princess who is bent on protecting her people and land.

After the death of the Beloved Land’s Queen, King Rumba falls ill and remains bedridden, as no cure from his medicine men seems to be working. Meanwhile, the vicious Prince Damian sees the King’s deteriorating health as an opportunity to take the throne from King Rumba and his sole heir, Princess Dembe, and perhaps make the Princess his wife, as well.

The Princess, however, refuses to cower to Prince Damian’s threats. Riding on a ferocious mountain gorilla, the brave Princess Dembe along with her guardsmen, each mounted on a wild beast, clashes against Prince Damian’s determined army. As the tension rises, a fierce battle ensues.

Through Princess Dembe’s bravery, Watch Her Shine offers a powerful lesson for children on courage. Instead of running from Prince Damian’s army, Princess Dembe charges forward, eager to defend the kingdom and her claim to the throne. She’s not only a strong leader but an admirably caring person: After her mother’s death, the Princess attends to the King and tries to find a cure for his illness.

The story includes magic that should fascinate its readers. As the woodland fairies become an integral part of Princess Dembe’s effort to defeat Prince Damian, they add a captivating presence as they devise magic spells to employ against the evil Prince.

The novel delivers a colorful cast that includes an anteater, a gorilla, and fairies. Unfortunately, some of the characters are only partially developed. Prince Julian, for instance, appears suddenly, without any information about where he comes from or his association to the Princess. Details about Prince Damian that would further justify his motives are also lacking.

While this flaw makes Watch her Shine less impactful than it might have been, Princess Dembe is a worthy role model. Her strength should inspire courage in young readers.