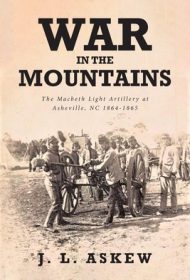 Diligent research and family connections inspired J. L. Askew’s compelling saga of the Macbeth Light Artillery brigade in its service to the Southern Confederacy in what the author refers to as the “War Between the States.”

First deployed from Union County, S.C., to bolster the burgeoning wartime efforts, the seasoned Macbeth contingent was sent to Asheville, N.C. in 1864. Initially, the weary warriors looked forward to the change, but soon found the high mountain terrain daunting, with its potential for surprise attacks, difficult transport, and the raids of lawless deserters hiding in crags and hollows. One of the worst enemies they encountered was notorious “Yankee raider” George Kirk, a Tennessean who left the Confederates to join the Union cause, becoming a hated adversary whose brutal tactics were feared.

The Macbeth participated in the struggle for control of Saltville, Virginia, a natural salt marsh. Salt was crucial to the survival of rural people and armies, as salt-preserved foods could mean the difference between life and death. The Macbeth also engaged in the lengthy defense of Asheville, a mountain town strategically located along one of the region’s few highways.

Askew examines battlefields, leaders and combat strategies in fine, critical detail, while adding breath to his work with human-scale events and local lore seen through the eyes of ordinary soldiers and some non-combatant onlookers, all immersed in the hell of war. His book reminds us that while academic sources may provide a broad landscape of battle and important names and dates, for those on the ground, war is an every-minute slog through unknown territories dogged by constant peril.

Askew based much of his research on the work of H. F. Scaife, who served as a lieutenant with the Macbeth and wrote a remarkable series of newspaper articles about the regiment’s exploits. In addition to Scaife’s accounts, Askew dug for numerous concomitant source materials, determined to offer this work in tribute to his Confederate soldier great-grandfather.

This in-depth examination of the Macbeth company, which proves Askew’s abilities as a dedicated wordsmith and scholar, should capture the attention of any serious student of American history and the inner workings of war.