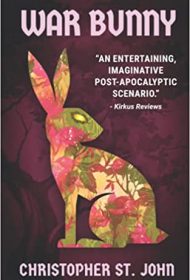 In War Bunny, a post-apocalyptic fantasy novel, the animal world order is disrupted when a young rabbit decides to fight back against predators, and in doing so challenges traditional rabbit religion and conventions.

Anastasia, daughter of the queen of Bloody Thorn Warren, is expelled from her home when she questions accepted religious doctrine. Her chances of survival seem slim but, after surviving a skirmish with a fox, she establishes her own burrow and finds followers among the rabbit, squirrel, and mouse populations.

The fantasy world of War Bunny is well conceived and conveyed. There is a clear hierarchy among the predators – wolf, coyote, fox, weasel – who control the rabbit population, or “lunchmeat” as they call them. Within the rabbit world, religion holds sway. Their God, Yah, has decreed that rabbits must accept their status as prey, and although they run from death, they accept it as their “Glorification.” Anastasia believes rabbits can fight back, but not everyone embraces her push for change.

Humor is a key strength, developed through slick dialogue and character development. For example, Love Bug, an amorous buck, welcomes new does to the warren with charming one-liners, and Dingus, an entrepreneurial squirrel, opens a hotel to accommodate visitors keen to see the rabbit that bested a fox.

But this is also a story with depth. There’s a spy in Anastasia’s warren, and a sinister shift toward more hard-line religious teachings in her old burrow. The perspectives of an extensive cast of characters including a fox family, wolves and coyotes, call into question the wider implications of prey turning predator.

Although aimed at a tween or teen audience, some of the language used is complex, with terms like “apostasy”, “eldritch”, “hypothesizing” and “diminuendo” suggesting more appeal for adult readers. The story ends on a satisfactory note, but key issues remain unresolved.

Overall, this is an impressive anthropomorphic tale that requires a sequel or series to explore what has been established.