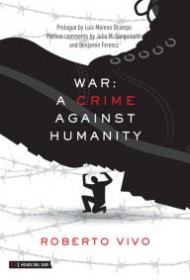 This impassioned plea for world peace makes profound sense. Uruguayan-born economist, editor and businessman Roberto Vivo bluntly writes: “The fact is that war is a clear and present threat and danger to the survival of planet earth,” and the arguments he makes—economic, historical, political, environmental, psychological—vigorously support his view. The big question, as always, is whether the powers-that-be are rational enough to listen.

A cooly elegant writer, Vivo surveys the enduring horrors of war-related slavery and racism, and he invokes thinkers from Hammurabi to Frederick II of Sicily, from Gandhi to Eisenhower to Nelson Mandela, in building his case for peace. But he’s neither a nostalgia-phile nor a dreamy fantasist. His tough-minded prescriptions include beefing up the United Nations (and other supranational agencies), establishing universal support for the International Criminal Court (the United States, for one, does not now subscribe) and this: “A final and essential step consists of classifying war and unwarranted aggressions as a punishable crime.”

Vivo acknowledges the just cause of the armed opponents of ISIS and international terrorism (not “war” in his eyes), but he sticks to his plowshares: For him, international cooperation is a viable tool, and global empathy might prove to be the “triumph of the human evolutionary journey.”

It’s evident to the alert reader that Vivo’s optimism grows from personal experience. He now lives in Argentina, but he lived through 13 years of harsh military dictatorship in his native Uruguay until, starting in 1984, it blossomed into one of the most progressive, prosperous and democratic nations in South America. It’s not for nothing that Uruguay’s heroic former president, Julio Maria Sanguinetti, offers a glowing endorsement of Vivo’s book in a preface, calling the author “a ceaseless activist for democracy.”

Students, world leaders and ordinary citizens would do well to absorb, and act on, his quiet rage.