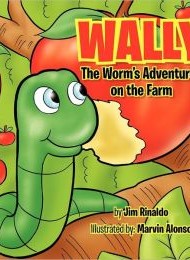 In this engaging children’s picture book, Wally is a worm with big plans for his morning: he wants to wiggle all the way across the barnyard to the apple trees, where he aims to munch into “a big juicy apple for breakfast.” That may sound simple enough, but when you’re a worm, the mission presents more than one obstacle.

First, a cow nearly takes a bite out of Wally as she grazes on grass. Then, Wally is forced to burrow into the ground to avoid becoming Red the Rooster’s breakfast. On the following pages, Wally just barely avoids being plucked for bait for Sam and Amber’s fishing outing; crushed by Harry the Horse’s hoof; squashed under the weight of Pete the Pig, and eaten by a robin that swoops down to nab him just as Wally manages to hide between two rocks. Wally avoids every peril and eventually achieves his goal.

Children are bound to enjoy Jim Rinaldo’s story, which is paced perfectly and features a very likeable Wally. Marvin Alonso’s illustrations complement the tale nicely, though they lack the sophistication of more artful picture books.

A few caveats: Rinaldo could have used an editor to catch some grammatical and punctuation errors (he seems to be rationing commas, which are absent in many necessary places), as well as simple copy editing mistakes. In addition, the title typeface is misguided. On two lines, it reads: “WALLY/ The Worm’s Adventures on the Farm. It would have been more understandable as “WALLY THE WORM’S/Adventures on the Farm.” And finally, the last paragraph takes some of the punch out of an otherwise tightly focused tale.

But overall, Wally is a delightful story about the rewards of perseverance. With a small bit of tweaking, it would be a seamless tale, worthy of a place on any youngster’s shelf.