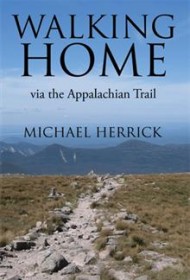 Michael Herrick’s compelling novel, Walking Home, traces two journeys on the Appalachian Trail: one made decades ago, the other in the present; one by a young man facing his future, the other by a disheartened middle-aged man unsure how his life got so far off track. Both hikers seek answers to universal questions about life.

The story begins as the soon-to-be 50-year-old, out-of-shape Walt happens upon the journals of Strider, a young, fit 20-something who details in his writing the 1,000-mile trek along the trail. Walt’s home life with his wife and two teen daughters is far from happy, and he is burnt out and tired of endlessly working to pay the bills. The hike presents the ideal opportunity for some soul searching.

The tale alternates between Walt’s experiences and Strider’s. As Walt walks, he faces danger, not only from the elements and wildlife, but from humans, who, for one reason or another are damaged, or simply do not believe hikers have any business in their part of the world.

This is an engrossing tale, well told in colorful and detailed prose. In describing an evening with several other hikers, Herrick writes, “They … formed friendships as instant as Ben’s rice … and lasting as Chinese food.”  Readers will encounter just a couple of missteps. At one point, Walt slips off to meet Seth, who he met earlier on the trail. It’s an important plot point, but Seth is an unpleasant, abusive man and it’s puzzling why Walt would make time to reconnect. Additionally, the relationship between Walt and Strider is initially puzzling as there is no explanation for why Walt would have the journal or what role Strider played in his life. But this is eventually made clear, and even adds a bit of intrigue to the story.

All in all, this is a great escape-read, one that should be enjoyed by a wide audience.