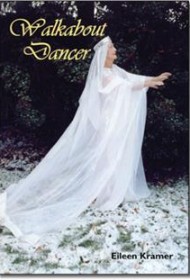 Walkabout Dancer is the story of an Australian woman who discovers the joy of dance in her mid-20s and finds her life’s path through creative expression and world travel.

Eileen Kramer became enthralled with dance while attending a charity performance of the world-class Bodenwieser Dance Company, led by famed choreographer Madam Gertrude Bodenwieser. Kramer auditioned, was accepted into training and began touring with the group soon after.

She became a valuable member, not only due to her expressive, energetic dance style, but also for her ability to design and construct dance costumes and masks. Kramer toured with the Bodenwieser dancers from 1944-54, at first throughout Australia and then in major cities around South Africa and India.

Kramer then struck out on her own, heading to India, Pakistan, London, Paris, New York and West Virginia, her current residence. Her travels helped her intermingle other cultures’ dance styles with her own, and she was equally influenced by the art, architecture and music she experienced. Besides dance, Kramer continued costume design, painted murals and enjoyed several romantic encounters.

Kramer writes with an artist’s eye, incorporating style, grace and solid visuals in her narrative. Recounting a walk along India’s Mahatma Gandhi Road, she tells of a stranger who unexpectedly handed her something he had found: “It was the perfect shell of a winged insect—a cross between a locust and a dragonfly, lovely to look at . . . The man had not even tried to speak to us, but had shared a precious moment. It was as if Krishnamurti had himself told us this gentle tale.”

Kramer’s nomadic story, highlighted with black-and-white photos, vividly recalls Kramer’s personal experiences. However, in her excursions through life and dance, nothing very earth-shattering occurs, and while she takes an occasional side trip on roads less traveled, her experiences aren’t that far removed from those typical of other tourists. As such, her memoir is more likely to appeal to those she has touched throughout the years than to a broader audience.