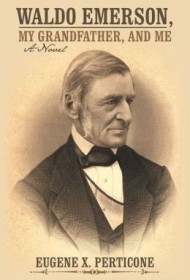 In this gentle, carefully written novel, a wise grandfather introduces a forest-roaming, apple pie-eating 12-year-old boy to the work of Ralph Waldo Emerson, awakening in him a spirit of inquiry and the beginnings of his own quest for transcendence. Grandpa and the philosopher he simply calls “Waldo” produce such a rapture of thought in the narrator, Matthew, that it’s “like firecrackers were going off in my head.” The boy is forever changed.

Eugene X. Perticone is a psychologist in upstate New York, and his own reverence for Emerson shines from every page of this volume. Those who haven’t read “Self-Reliance,” “The Over-Soul” or either version of “Nature” for awhile are in for a treat: Perticone gives us a useful refresher course in “solitude,” “conduct” and “revelation” as Matthew’s eyes are opened for the first time.

The setting is appropriately bucolic: Matt and his young friend Sally (who also becomes a student) frequent green, idealized places called Old Mill Pond and The Glen; Grandpa’s modest house, where he delivers most of his kindly, two-year tutorial, is called The Abode. In fact, the entire book gives off an ethereal glow akin to Emerson’s famous “gleam of light.” In short, here is the linchpin of the American Romantic Movement made accessible for readers of all ages.

If there’s a weakness, it may lie in Perticone’s repetitions. But he’s a teacher, after all, speaking through Grandpa, and if repeating lessons is what it takes for an intelligent boy—or us, for that matter — to see that “man is a stream whose source is hidden,” then so be it. Wisely, Perticone even gives the boy a chance to apply what he’s learned. Facing a midlife crisis, Matt’s father retreats to Canada. It is only after reading “Self-Reliance” on his son’s recommendation that he finds his way.

Too neat a finish? Maybe, but one that suits this eloquent valentine to the Concord Sage.