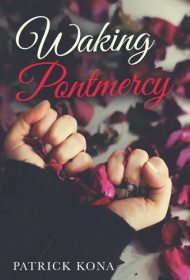 Cosette, the adopted daughter of Jean Valjean, knows little of her background, beyond faint memories of her birth mother Fantine. Although Cosette mourns the death of Valjean, Marius and Cosette’s future initially seems bright. Cosette undertakes a horticulture career and Marius is a successful exporter, operating in Paris and Le Havre. Eventually, however, issues including post-partum depression, SIDS, suicide, alcoholism and drug addiction stress their relationship. Cosette is also troubled by mysteries of her past. Might finding her birth father help her conquer the alcohol addiction that threatens her health and family?

Although Kona demonstrates a strong affection for his characters and Hugo’s famous novel, Waking Pontmercy is a challenging read for many reasons. First, the story lacks clear narrative drive. Early chapters jump back and forth in time, dipping into storylines from long ago and then switching to the present-day without explanation.

Characters are defined through “telling” rather than “showing,” and the narrative often lacks believability. For example, despite references to the limits to women working at this period, Cosette is somehow awarded a commission from the royal family at Versailles and works as a horticulturist while heavily pregnant.

Overall, significant weaknesses make this seem more of an early draft than a polished, developed novel.