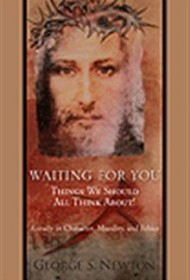 Author George Newton, a former teacher and lay minister, believes a person’s life should be lived out in “thirds”: One third learning, one third working, and one third teaching others how to live rightly. His book, Waiting for You, contains his opinions and conclusions regarding achieving the aim of right living.

Part editorial, part autobiography, and part dissertation on ethics and morality, the book skitters from topic to topic in a kaleidoscope of loosely related information. For example, in the first chapter, the author bashes former Soviet Union presidents, then rants about immigration reform and the antics of the UAW. Unfortunately, much of his social and political commentary, meant to establish that our society is a mess and needs change, is based on outdated events, thereby weakening his premises. Nevertheless, he makes a reasonable case for the “strong need to put God back in our lives.”

On a positive note, Newton populates his text with quotations from a wide variety of well-known and respected sources in the field of character-building and right behavior, including Bertrand Russell, Confucius, and Dr. Laura Schlessinger, as well the Bible. Newton’s research efforts are commendable.

Unfortunately, Newton’s writing style swings from conversational, and sometimes even folksy, to lofty and text-bookish. The former suffers from lack of editing, while the latter is often wordy and rambling. Examples are his segues into long autobiographical passages, such as in Chapter 5, “A Case for Religious Education,” or his lectures, such as in Chapter 6, where he expounds on the benefits of studying literature, history, and having good writing skills.

A life well lived is certainly worthy of mention and example. The average reader, however, would find Newton’s message more palatable if he would have structured the book strictly as a memoir rather than combining his personal story with the more heady information on church history, morals and ethics, politics, etc. In its current state, it’s a scattered and often challenging read.