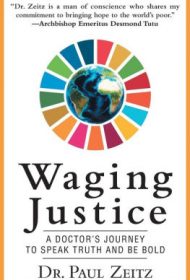 In Waging Justice, Dr. Paul Zeitz delivers an inspiring memoir detailing his fight against a global epidemic. He deftly weaves his enthralling tale as a medical activist into a nuanced account of his own struggles with childhood trauma.

Zeitz devotes much of his writing to his activism in the African AIDS movement. His story spans continents and arenas, ranging from his experiences as a government adviser in Zambia working on HIV/AIDS-related issues to his time in Washington, D.C., where he has worked and advocated on behalf of various organizations.

His narrative is filled with telling moments. He vividly recounts the triumphant opening of the Kabwata orphanage in Zambia, for example, which he helped establish as a refuge for children orphaned by the AIDS epidemic. His success, however, was marred by the death of David, an infant infected in the womb with AIDS. “The ghost of David filled our lives throughout our time in Zambia,” Zeitz writes.

Political readers will be captivated by stories of Beltway maneuvers, especially Zeitz’s experience on Capitol Hill in 2003 with the Bush administration’s announcement of the President’s Emergency Plan for AIDS Relief. In the same speech, Bush declared war on Iraq; some suspected the AIDS relief plan was a “smokescreen” to distract people from the Iraq announcement.

Zeitz also provides a heart-rending account of his own struggles to survive the impact of sexual grooming and abuse by his father while he was still a young child. Portrayed both lucidly and candidly, his experience will be of immense value to survivors and anyone looking for insight into child abuse’s long-term effects. Zeitz illuminates how such traumatic struggles and his drive to activism inform one another, giving the narrative a particularly human component.

Zeitz writes with a remarkably passionate tone that can occasionally feel didactic, but that doesn’t detract from the memoir’s impact. This intriguing work captures the struggle of the human spirit against great odds, meriting close reading and study.