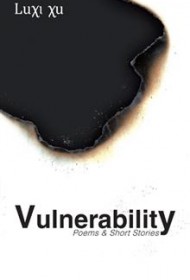 Vulnerability: Poems & Short Stories by Luxi Xu delivers a central theme revolving around the pain of love, longing, and heartache. The poems and stories are earnest and, indeed, show vulnerability.

The book includes a handful of prose pieces. Most are first-person, memoir-like narratives written in stream-of-consciousness style. Although they are somewhat formless, they contain admirable detail of physical sensation and shifting emotional states, as in “Tired,” which begins, “My body was heavy, I had no will left, my breathing grew strained with the effort of just standing. Sweat dripped down my forehead and tittered on my lashes before slowly running down my cheek to rest at the base of my neck.” While evocative, however, the piece never explains why the narrator is so exhausted, and there’s no setting or external description to give readers context.

In the book’s poems, the motif of brokenness appears frequently. The narrator often moves from innocence to disappointment or resignation. The poem “Pressure,” for example, contains the lines, “To protect my love, / My pride lies broken” and later ends with, “As the terror sinks in, / I want to flee / But I’ll stay to die, / Because I’m me.”

Xu’s metaphors are frequently melodramatic: “The cigarette burns that / splatter across your / back form constellations / of your tattered past.” And the author sometimes uses verbs in a way that doesn’t fit the image given. For example, in regard to the lines mentioned above: Burns (and also scars from burns) don’t “splatter.” While the language can feel bright, it requires more careful thought in its usage.

Overall, these poems communicate the strong feelings, and readers interested in romantic, melancholy poetry might enjoy this book. Serious readers of poetry, however, will find the issues mentioned off-putting and the work generally flawed.