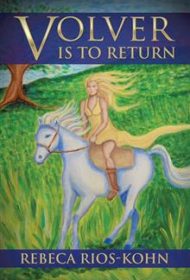 Rebeca Rios-Kohn’s debut novel Volver is to Return is a complex, layered story with many plot turns.

UNICEF worker America Somerville is traveling for work when she receives word from her estranged brother Santiago that their father is dying. America has never reconciled with her family after a falling out after their mother’s death. However, when her husband and their son, who are also traveling, are killed in an explosion at a hotel in Jordan, she tries to pick up the pieces of her former life in Uruguay.

During her return, America’s father puts her in charge of the estate affairs, taking the responsibility from his son. As the story unfolds, many devastating family secrets are revealed, including Santiago’s illegal dealings in selling pieces of the family estate, a surprise twist with her son and the true cause behind their mother’s death.

The story is “inspired by [the author’s] real-life experiences,” according to the back cover, which notes that Rios-Kohn worked with UNICEF and other United Nations agencies for more than 25 years. As such, it offers unique insight into the inner workings of an organization like UNICEF and the behind-the-scenes politics that exist even there. Readers will find themselves wondering, however, if the material is entirely relevant: In the grand scheme of the novel, UNICEF plays very little role except to put the protagonist across the globe during personal tragedy. The story might have been more streamlined if America were employed in a simpler role.

Another issue is the overabundance of characters, which sometimes proves confusing. Everyone America meets, even casually, seems to reappear later in some way. Additionally,  there are so many subplots that they frequently threaten to swamp the story.

Still, despite being over-packed in story and cast of characters, the book offers many rewards. It will appeal to anyone interested in world politics, while still desiring a little melodrama and tugging of the heartstrings.