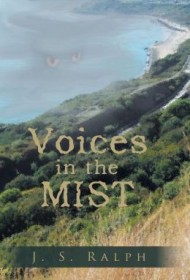 Global warming meets fantasy in British author J.S. Ralph’s young adult novel, Voices in the Mist. Set on the cliff-bound southern coast of England, the narrative seems staunchly and appealingly British as it follows a plucky child rising to the occasion when adventure calls.

Twelve-year-old Suzy is the adventurer here. After discovering a winged creature called Scratch in her grandparents’ attic, she is given entree into the world of fantastic paxteys, creatures like Scratch who live in a cliff-side warren. It seems much has been readied for Suzy’s welcome into the paxteys’ realm, including the fact that her grandparents know she has been chosen to help the creatures. In fact, her grandfather has even built a charming summerhouse that becomes a magical vehicle transporting her to the warren and elsewhere.

Suzy soon learns that she is charged with no less than trying to help save the world from climate changes that cause mudslides and more in the warren – and from an evil, hideous being called Ogystone who has lost the power of compassion and is bent on destroying the environment.

A smart, spunky girl, Suzy soon discovers she is just as adept at rising to real challenges as she is at sitting down with a nice cup of tea. This juxtaposition of the fantastic and the ordinary works well to anchor the action and to provide a sense of security in the face of the scary notion of global warming and encounters with Ogystone and his minions.

This book’s leisurely start may lose some readers, but action speeds up as the battle to protect human and paxtey environments ensues. Additionally, the book’s strong allegorical treatment of environmental degradation could have been more timeless had the author avoided references to specific technology, such as Suzy visiting the library to consult the Internet or shopping for CDs.

Despite such issues, the book remains imaginative and often-engrossing fare for young adult readers.