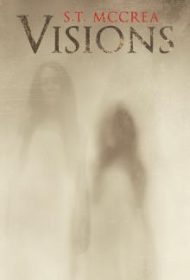 S.T. McCrea’s Visions revolves around a life-threatening mind game in which the protagonist is the intended prey.

Sara Erin Slane Remington Allbrooke has more than a cumbersome name to shoulder; she’s inherited the ability to connect telepathically with kidnapped children and the kidnapper. Once a link is established with the child, she endures their same feelings and experiences. Sara is married to detective John Allbrooke, who relies on his wife’s assistance to find the victims before they’re killed.

Sara is a caring, intelligent woman torn between a desire to help others or maintain her own well-being. Malachi Campbell is her unknown nemesis seeking revenge for the way he was mistreated by the Slane-Remington family in the past. With psychic abilities similar to Sara’s, Malachi orchestrates the kidnappings to engage Sara in paranormal dialogue—exchanges that take a physical toll on her.
The story’s characters are well-developed and nuanced. Their joys and troubles are relatable, and the novel’s rapid pace grabs readers, rarely letting go. Although the focus is on Sara, the author evokes concern for the children and others in Sara’s life.

There are some issues, as well. While the author deftly conveys what Sara visualizes and the panic she senses, some suspension of disbelief is needed regarding Malachi’s telepathic taunts and Sara’s ability to physically feel the victims’ suffering.

Additionally, the narrative never fully explains how Malachi came by his powers. And the role of retired Navajo detective Samuel Hawk is under-developed. Hawk gets involved when he realizes the kidnappings resemble those that occurred on the reservation years ago. In a parallel plot line, he’s looking on behalf of the Hopi for the “chosen one” to lead that tribe through the end of days and suspects it could be Sara. But this is never resolved, perhaps to be addressed in the sequel the author notes will be “coming soon.”

Despite several loose ends resulting in an unsatisfying conclusion, Visions is well-written, and readers will appreciate Sara for her empathy and personal strength.
Also available in hardcover and ebook.