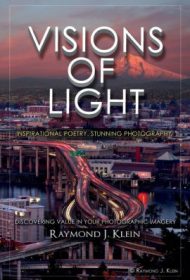 With his Visions of Light, Raymond J. Klein offers a book of luminescent photography, accompanied by a selection of coordinating poems.

Most of Klein’s photos depict vibrant, cascading geometric forms, arranged to give the illusion of energy and motion. Although the photos make use of different forms and patterns, (“Scintillation,” for instance, is “a layered composite of triangles and rectangles,” while “Elliptical Iridescence” is composed of circles and rectangles), it is clear that these works spring from the same impetus and concept. Indeed, Klein, an advertising photographer, states that the series was prompted by an assignment for one of his clients. It led him to a “mind expanding illumination, to thoughts of exploding bursts of light.”

Klein also includes several representational images in this collection. There’s one of a newsboy leaning against a post, forming the still center of a busy street. In “Mount Hood at Lost Lake,” boaters are silhouetted against the mountain and a darkening sky. Especially deft are the overlaid images of a saxophone Klein created for a record cover, and, in “Feeding Seagulls,” the exquisite reach of a woman to birds overhead.

All of the images are professional grade, and Klein includes detailed instructions concerning their composition in the back of the book.

Less professional, are the poems meant to augment the photos and, presumably, to render Visions of Light a work of photopoetry. All of the poems are written by writers “who live within a twenty-mile radius” of Vancouver, Washington and, regrettably, show flaws of poets who have yet to master their craft. Most of the poems are replete with abstract language (“wisdom is unforeseen/ wonder is surefire”). Some use over-worked images (e.g., “no time left/ to walk the tightrope across chasms”), or strain to rhyme (“where sparkly stars and tiny snowflakes/ dance and play in winter’s make”).

Visions of Light is, nevertheless, well worth reading for its striking photography and helpful compositional instructions.