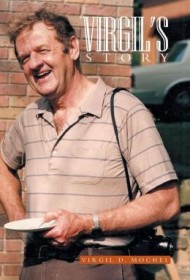 Mochel was born in 1930, one of six children, and grew up near South Bend, Indiana. He has straddled two worlds, both farming and working as a chemist and researcher (he earned a Ph.D. in physical chemistry). Along the way, he has led a full life.

Mochel tells his stories in a conversational tone that generally holds the reader’s interest. He often includes small, vivid details. For example, writing about his siblings, he tells us what their first words were. Later, he doesn’t just say that the family members were regular church-goers; he adds that they always sat in the same place, the fourth pew on the right. Those little nuggets bring a nice touch to his stories.

Some of Mochel’s tales are what you’d expect from a personal memoir: memories of school, life on the farm, his courting of wife Maria, his time in the service. Others are more out of the ordinary, such as his recollection of the deaths of two older brothers in WWII.

Unfortunately, Mochel’s book could use some healthy paring in order to appeal to a wide audience. At times, Mochel’s details become overwhelming, dragging down his pace. There’s an extended explanation of harvesting, for example, and a crash course in nuclear magnetic resonance, the author’s area of expertise. Both go on for pages, while most readers would have settled for the abridged versions. Also, near the end, Mochel begins repeating stories told earlier.

Mochel’s son, daughters, grandkids and other relatives will no doubt treasure this book, so rich in family history. While the volume holds less attraction for general readers, various passages may appeal to those interested in America’s past, as Mochel offers a first-hand look at rural life in the 1930s, the Depression, WWII and Korea.