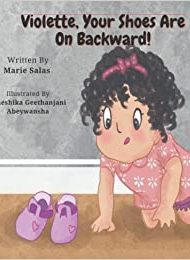 A preschool-age girl discovers why it’s a good idea to wear shoes the correct way in the picture book Violette, Your Shoes Are On Backward!

Violette’s mother often tells her that she’s wearing her shoes backward. It’s an event that happens every day, but that doesn’t seem to bother Violette. The book traces her daily routine of dancing, playing, and relaxing, until she falls while running and skipping. After the stumble, Violette goes to her mother and tells her that the shoes are indeed backward.

This is a cute book, with engaging illustrations that impart a sense of Violette’s lively, carefree existence and deliver notable details, like the beam of sunlight that illuminates the kitchen while she dances.

Unfortunately, the story’s message is muddled. It’s apparent that Violette has a long-standing problem of wearing shoes backward, but with her mother pointing this out daily, it’s unclear whether Violette’s difficulties stem from her not listening, not caring, or just forgetting.

It’s also unclear whether the fall is truly caused by Violette’s bad habit and if her realization afterward is simply the result of her finally noticing the backward shoes or understanding that they might have made her fall. When she tells her mother, “Momma, my shoes are on backward,” the mother’s response is calm and soothing (“as long as you know the difference, that’s all that matters”) but oddly downplays the potential problems of Violette’s bad habit, while undermining the importance of Violette learning how to wear her shoes.

The book is written in rhyme, which sometimes works well and other times delivers awkward vocabulary and phrasing that seems chosen for sound rather than meaning. There are also minor technical mistakes, like a misplaced comma that obscures the meaning of the sentence (“Fixing the small boo-boo, she got on her knee).”

This is a light, cheerful book with an interesting premise. Revision to develop the idea would help it attract a wider audience.