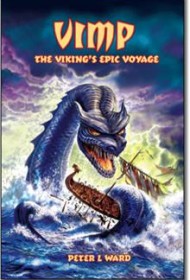 Vimp the Viking’s Epic Voyage is the first novel in a rollicking Viking trilogy for young adults by Peter L. Ward. Mixing elements of Norse mythology, adventure, cheeky humor, romance and magic, this page-turning read follows a young band of Viking tweens as they try to escape a destiny of violence.

Much to their parents’ horror, young Vimp the Viking and his friends aren’t interested in learning how to bash heads and don’t care about “thieving, nicking and pilfering.” Instead, they’re interested in the world beyond their village. When Vimp chances upon the mysterious and beautiful Freya in the forest, little does he know his world is about to be changed forever.

The mysterious Freya is the granddaughter of the village elder and friends with her grandfather’s Saxon slave, Emma. When her grandfather dies, Freya learns that her much-loved friend is to be killed and buried with her old master. Freya can’t let this happen. With Vimp and the village boys planning to escape the village in the longboat they have just built, Freya begs Vimp to let her and her girlfriends escape with them in order to save Emma from certain death. Together, the tweens set off on a dangerous journey across open waters to find the Saxon shore. Along the way, Freya’s mysterious powers are revealed in all their glory as the tweens battle pirates, Viking warriors and super-natural monsters of the deep.

Ward has written an entertaining novel that will keep young readers engaged and looking for more. Strong characters and a dash or two of silly humor move the adventure along at a nice clip. With rich and compelling black-and-white drawings by Steve Crisp, the book offers an engaging introduction to Viking history and mythology, as well as a page-turning adventure with heroic kid appeal.