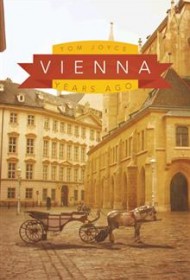 Vienna: Years Ago collects six short stories set in 1945 and features characters whose stories overlap and intersect throughout.

Author Tom Joyce’s background includes military service, wherein he took ex-Nazis to Frankfurt, Germany for “de-Nazification” proceedings. The war serves as a backdrop for these stories, in which a husband and wife chat in a train station, a prisoner unsure as to why he’s been jailed tries to send a coded message to someone on the outside, four friends meet for drinks, and other small scenes play out; one is a brief, three-page musing on a husband and wife walking and holding hands. Rather, he’s holding her wrist, and noting, “You have a marvelous wrist. I am fascinated by your wrist.”

Therein lies a problem. These are very short stories, yet each one is peppered with this kind of repetition. An early story mentions a woman laughing in “E-flat” three times in six lines of text; in another, the colloquialism “Amis,” for Americans, is used in three consecutive sentences. Very little happens in each story, and it’s difficult to assign meaning to any of the proceedings while distracted by these thought-loops. The lack of plot and character development also impedes the stories’ ultimate impact; for example, a character who is alive in two stories is recalled as dead in another, but the details of her passing barely register, as we haven’t really gotten to know her.

The time and place that envelops these stories opens up a world of possibilities, but Vienna doesn’t capitalize on them. Stripping out some of the repetitive passages and offering details in terms of setting and historical context could breathe life into these short stories and their characters; as it stands, the protagonists feel somewhat trapped on the page. As a result of all these issues, readers will find it hard to fully engage with the work.