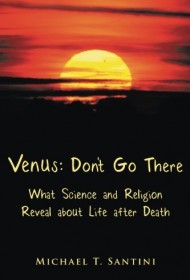 Michael T. Santini’s book uses both scientific facts and biblical exegesis to explore answers to questions concerning the afterlife and whether or not places like heaven, Hades, or the biblical lake of fire physically exist.

A licensed pastor with a doctorate of ministry who once worked as an aerospace engineer on federal government space programs, Santini is able to skillfully grapple with these difficult questions. His thesis asserts that the planet Venus is an appropriate model for the lake of fire, the dwelling place of the condemned after God’s final judgment day. He even argues that Venus may actually become the lake of fire, while leaving the option of other possibilities open for consideration.

Using laws of physics, he argues that heaven, Hades, and the lake of fire exist in material form within space and time and are not just mere abstract ideas. He then uses both scientific evidence and thorough biblical exegesis to conjecture that in the future, heaven may possibly be located on Earth; that Hades, a temporary place of imprisonment, could be located in a cavity within Earth’s inner core of iron and nickel; and that the lake of fire may come to be located on Venus.

Most fascinating is his abundance of scientific and scriptural evidence showing similarities between Venus and the lake of fire as described in the Bible (i.e., Venus’s surface is covered with volcanoes and lava fields and has a constant temperature of 864°F).

Santini’s combination of scientific and biblical evidence is strongly convincing, and the idea that the lake of fire may come to be located on Venus is fascinating. One quibble: Since pardon is a biblical theme equally as dominent as salvation and judgment, it would have been illuminating had the author explored when pardon is likely or unlikely to be granted.

Nonetheless, due to Santini’s meticulous arguments, all sorts of readers will find his book intriguing — believers, non-believers, scholars, and non-scholars alike.