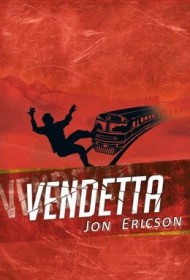 Vendetta is a crime novel about what happens when past mistakes come back to haunt you.

Robert George is a respected Detective Inspector with the Melbourne police department who is called to the scene of a young woman’s murder. He is shocked by the brutality of the murder, but even more so by the discovery that he knows this woman; she’s the sister of Robert’s childhood friend. Robert believes this is just a sad coincidence until the body of another brutally murdered man, also connected to Robert’s childhood, is discovered. Robert realizes that these murders are connected to a tragic incident from his youth, and that someone is taking revenge on all those who were involved.

Author Jon Ericson paces Vendetta well. The novel starts out with a bang and continues to move steadily from beginning to end as the author keeps the reader entertained through twists and turns. Protagonist Robert George is appealing, a single father whose wife passed away. He’s smart and resourceful, determined to get to the bottom of this case. The villain is equally well written and creepy; he hides behind a fake priest’s collar in order to gain his victims’ trust. It’s a small creative element, but one that is absolutely believable and characteristic of the author’s attention to detail in this novel.

The writing in Vendetta is clear and easy to read. The book is divided into chapters with different narrators, and there are often flashbacks. Ericson handles these jumps smoothly, and the reading experience isn’t jarred or disturbed by these changes in time, place, and character. Overall, the novel makes for an interesting, exciting read that fans of crime fiction are likely to enjoy.