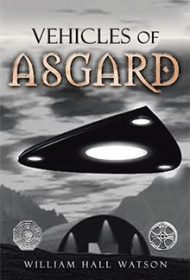 In Vehicles of Asgard, William Hall Watson suggests that some of man’s ancestors were not from this world.

Watson draws on numerous sources, from the Bible and Rig Veda to newspaper articles, in order to present his ideas. He writes in a conversational tone as he explores such varied topics as creation myths, alien visitations, car emblems, witchcraft ceremonies, and the giant hermaphrodites he claims were predecessors to man.

One of Watson’s primary theses is that refugees from an exploding planet (which he calls Aster) populated Earth. He associates Aster with the myth of Atlantis and speculates that the people of Mu (from a 19th century idea of a lost continent generated by Augustus Le Plongeon) warred with those of Atlantis in Earth’s pre-history. After the war, according to Watson, “the Atlanteans of Aster reverted to a non-technical society,” and the Muvians greatly injured themselves through a “misapplication of the powers unleashed by atomic physics.” The Atlanteans became the “Negroids” on Earth while the Muvians were largely “Caucasoid.”

Although Watson’s book can be informative, its structure is sabotaged by extraneous material that makes it exceedingly difficult to follow the author’s line of reasoning. In a chapter dealing with creation myths, for example, Watson starts a stream-of-consciousness discussion on cats: cats as objects of worship, as magnetic forces of nature, as familiars, as pets, as depicted on regimental badges, and so on.

In addition, there’s a frustrating lack of specific source material here. Intriguing and controversial statements such as, “the Garden of Eden was recently identified as located at Dilmun…on the island of Bahrain,” are simply dropped on the page without any citations.

Watson offers some creative approaches to his topics, and patient readers open to such thought (who are not overly concerned with documentation) will find interesting ideas here. But the book requires thorough editing and more careful documentation to deliver a convincing argument to skeptics and other, less trusting, readers.