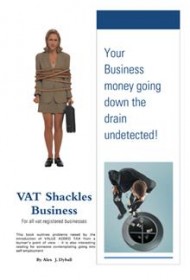 The author of this small treatise on the Value-Added Tax (VAT), Alex J. Dyball, apprenticed as an accountant prior to his opening a Fish-and-Chips shop in Northern Ireland in 1961. Despite his subsequent career (ultimately operating three shops in Belfast, as well as a catering business and a catering equipment company), he clearly lost none of his affinity for numbers.

This work, filled with a dazzling amount of charts and tables, makes the case that the VAT is an unfair, overly complex legislation that stifles business, harms the consumer, and has been the cause of stagnation in the economies in which it has been instituted.

These are points that great economists and politicians often argue, but Dyball, unfortunately, is not in the same league in terms of putting forth a coherent and compelling case for himself. His arguments focus on minutiae and are delivered with writing so convoluted that they are virtually impossible to untangle. The charts and tables do little to help clarify his points. All of this makes Dyball’s book seem far longer than its slender 64 pages.

Dyball continually refers to himself as “we” and uses sentence constuctions such as “In fact” repeatedly. The book is also rife with grammatical errors, such as “I bought [sic] this to Prime Minister John Major [sic] attention.”

Although the reader can infer throughout that Dyball has some sort of personal ax to grind with VAT and the governments that institute it, this becomes confirmed only at the conclusion when he references the numerous tax investigations he and his wife have undergone (in four consecutive years). While this in itself does not diminish the work, the writing, poor grammar, and lack of a clear and compelling argument do.