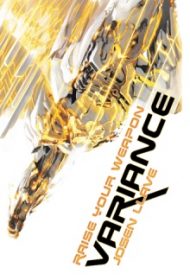 Paul Benedict and his family are members of a virtually immortal race called the Utopians, whose long lives are due in part to their genetic predisposition for peace. Now under attack on his home planet Azure, Paul is the only Utopian capable of defying his genetic programming to fight an alien invasion and subsequently to represent Azure in Divine Right, an interstellar gladiator competition (think Hunger Games) headed by Shadow, the alien ruler behind the attack. Armed with a special battle suit designed by his family and accompanied by an artificial intelligence called Siren, Paul must compete not just for himself but for the fate of his people.

This is an interesting conceit, and from beginning to end Variance is action-packed, Paul risking his life while struggling against his genetic pacifism and desire to avoid inflicting violence.

Unfortunately, much of the action is incompletely or vaguely described, and it is obscured further by the author’s constant use of his proprietary terminology. Readers will have trouble acclimating to the jargon.  Additionally, important plot points go unexplained. Why, exactly, is Shadow willing to risk his war for the sake of a contest? Why is Paul’s pacifist family so adept at building battle suits? Even variance, the eponymous substance of which Paul’s suit seems to be constructed, is barely explained.

Variance includes some interesting character developments. The AI Siren, taking human form reminiscent of Paul’s wife, develops an infatuation with him, and Paul befriends a disillusioned Utopian, providing a counterpoint to the protagonist. Throughout, Paul struggles against losing his identity and even his sanity. However, none of the characters (particularly Paul’s family) are drawn in enough detail for the story’s conflicts to generate much tension.