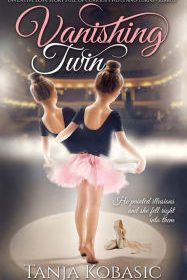 This undeniably unique and entertaining dark fantasy revolves around conjoined twins: two strong-willed and inspiring women who are fused at the pelvis.

The story begins with the sisters, Scarlett and Jade, in the midst of a national book tour promoting their New York Times bestselling autobiography, My Sister’s Hands, in Las Vegas. But in Sin City, they meet world-class illusionist Sebastian Cole, who has essentially had an entire hotel and casino built around his act. Scarlett and Sebastian have an instant connection, but Jade, who is smitten with the handsome magician as well, creates an incredibly complicated dynamic.

As Scarlett and Sebastian maneuver through the minefield that is Jade’s fragile and combative ego, they begin to realize that they have more in common than they ever could have imagined. Sebastian shares some bombshell secrets with Scarlett: But the fact that he, too, was a twin (who absorbed his brother in utero) is nowhere as shocking as the fact that he possesses the power of his twin, who is the reincarnated spirit of a Nephilim who, thousands of years earlier, was considered the “greatest magician to have ever lived.”

Being pressured to join a demonic cult that wants to take advantage of Sebastian’s power to recreate the world, he must make some impossibly hard decisions regarding his future and regarding Scarlett, especially considering his aunt’s warning to “keep all that you love away from the darkness.”

Excellently developed characters, brisk pacing, an intensely spiritual undertone, and a highly original take on the battle between Good and Evil make this a page-turner of a read; the only criticism would be that the ending is anticlimactic and unsatisfying, as it lacks the anticipated explosiveness. But, that said, the sequel to Vanishing Twin (tentatively titled Twin Flames) could very well make readers quickly forget this weakness as they eagerly learn what comes next.